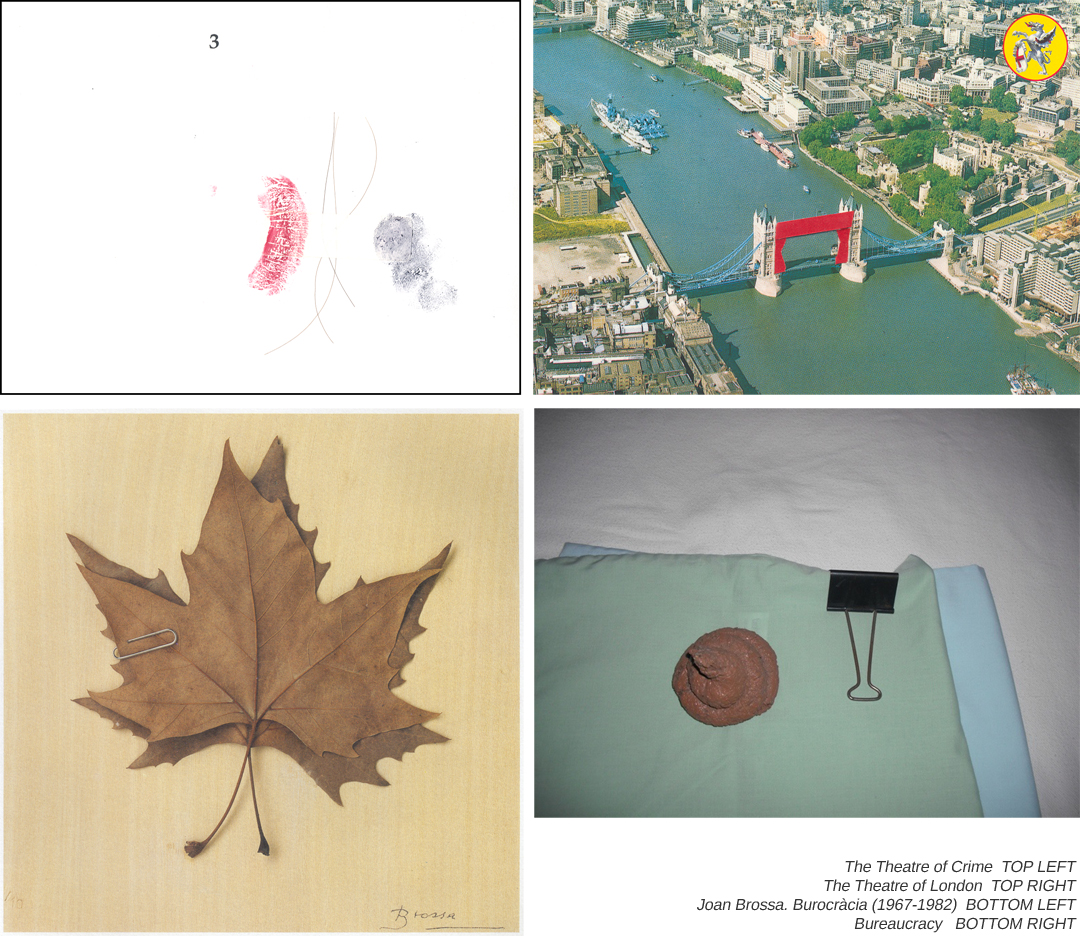 In this collection, prefaced by a manifesto, London replaced theatrical dialogue by objects, symbols, and colours each entering into a different kind of dialogue with the other. The book could be translated as The Theatre of the Page.

The pomposity of the title on the envelope (Great Theatres of the World) forms a contrast with the small artistic form and the way the author’s name predominates in a different context. On the other side of the original, the same red felt opened up to reveal the title of this particular theatre.

Joan Brossa’s Catalan Object Poem Burocràcia plays with visual and verbal associations. In Catalan, there is a close association between fulla, the word for leaf, and full, the word for sheet (of paper, for example). In other languages, the same word is used (Blatt, hoja, etc). In English, however, the play on words is not immediate. John London has substituted Brossa’s objects to translate one or two aspects of the idea. How does a Spaniard pronounce ‘sheet’?

John London has been devising ways of translating action and objects for over twenty-five years. His work includes translations of more than thirty plays (from Spanish, Romanian, Catalan, Portuguese, and German); the insertion of physical objects into scripts (some of which were published as El teatre de la pàgina, 1993); and some photodialogues (published as You Know How These Things Are, 1998). His plays, such as Right (1999), The New Europe (2000), and Nex (2005) have been performed on the London fringe. John is Professor of Hispanic Studies at Queen Mary, University of London and has written books on theatre, literature, and art.

John is loaning three intersemiotic translations to TransARTation! The first is Bureaucracy, a translation of Burocràcia by the Catalan artist, poet, and dramatist Joan Brossa. One of John’s projects over the years has been to translate selections of the writing of Brossa, whose way of working with objects also requires translation. In verbalizing the object, a wordplay is created for the English-language spectator. The second and third loans consist of two small art works by John, taken from his Theatre of the Page project (The Theatre of Crime and The Theatre of London).