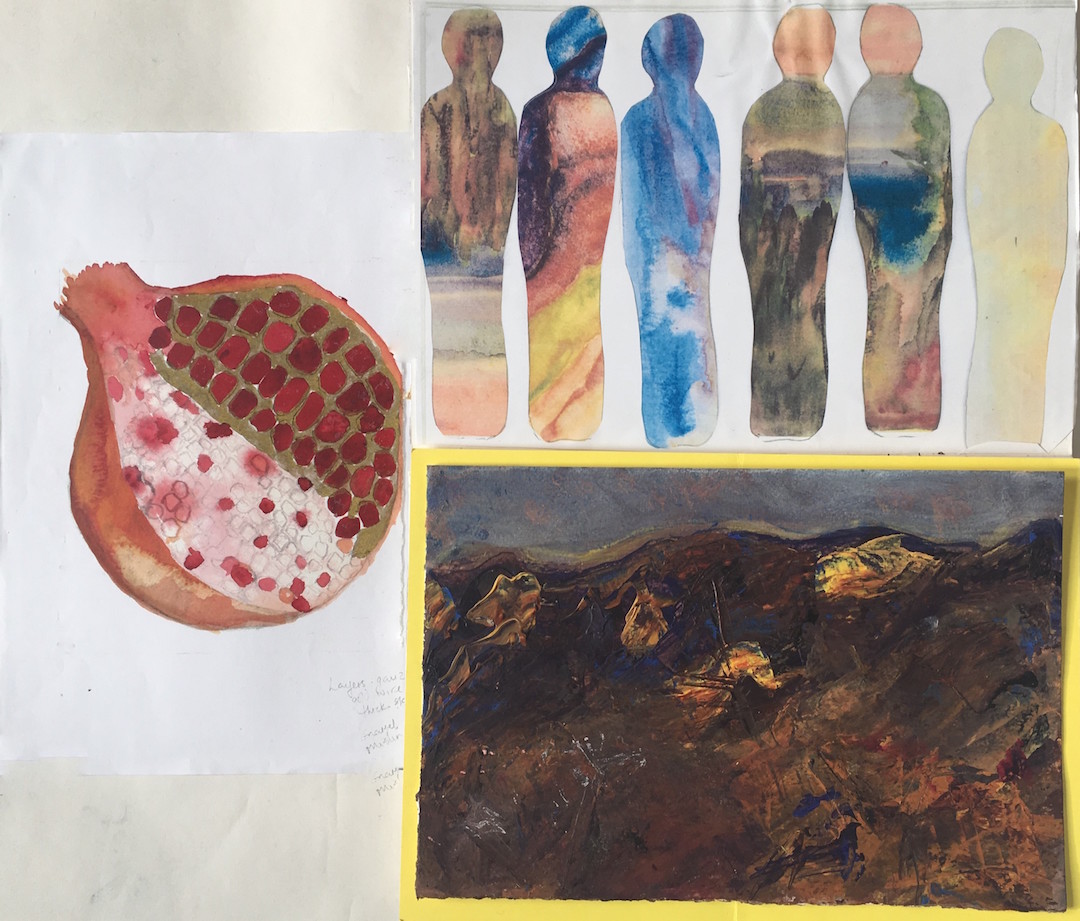 Kirsteen’s artwork is in two parts: a sketchbook – the seedbed for ideas/imaginings, a place of process, that led to the product – the Pomegranate Palimpsest. This material object, composed of layers of texts and visual images, translates intermedially – in the sense of giving it expressive form in more than one medium – the loss of her mother many years ago. Kirsteen’s inspiration was the pomegranate, central to the mythic mother-daughter separation of Demeter and Persephone, as both physical form and concept (fusion/individuation).

As an artefact, the form of the palimpsest seeks to translate, or embody aesthetically, the structure of the pomegranate, simultaneously a container and its vivid contents. Just as the seeds of the fruit enable its reproduction from within itself, so the creative potential of the self is seeded from the layers of the palimpsest. This suggestive form also hints at the space of the maternal body through the landscapes associated with it and, at the same time, as a fertilising absence in the daughter’s imagination. The spiral-bound structure of this image/text, always able to absorb new pages/inscriptions/insertions, points to the metaphorical open-endedness of the process of transcribing the self visually and verbally.

Another important aspect that the artwork captures is the way visual and verbal texts ‘intertranslate’ each other: neither had precedence in the creative process – sometimes words came first, sometimes images. The superimposed layers of the palimpsest never entirely blot out those beneath which are positioned so that verbal and visual interpenetrate each other when the palimpsest is viewed from above. In this way the traditional ekphrastic prioritisation of word over image is undermined. Translation is also at work in the linguistic detail of the texts here. Her ‘versions’ or ‘transgressions’ of the sonnets of the nineteenth-century French poet Gérard de Nerval pay tribute to the imaginative resonance of his poetry.

Kirsteen Anderson has worked for many years as a university teacher at Queen Mary University of London, and as a writer and artist. She has published in the fields of French literature and thought, translation and the role of imagination and creativity in disciplinary learning. Her practice draws on training in a range of directions including art therapy (Goldsmiths’ College, University of London); the role of the arts and therapy in education (IATE, London), and in Creative Writing (with a specialist focus on translation) at the University of East Anglia. In her university teaching she offers courses which engage a student’s own creativity with the precision and theoretical rigour of academic work as part of the learning process. Her practice as an artist began as part of an ongoing attempt to bring the critical and creative sides of her life and work into a more fruitful relationship. Movement – yoga, travel – helps maintain this vital balance.